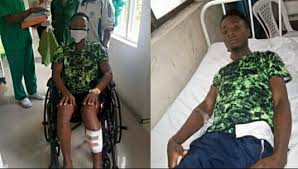 The Police in Rivers State command has detained the police officer who shot the 19-year-old boy identified as Ledisi Kote in the leg for impregnating a young girl in the Gokana Local Government Area of the state.

Newsnaija brought you news of a police officer who shot a 19-year-old boy on the leg for impregnating a girl and dumping the boy in a hospital.

Nnamdi Omoni, The Police Public Relations Officer in the state, told our source on Saturday that the police officer has been disarmed and detained at the State Criminal Investigative Department, pending the conclusion of investigations into the incident on the orders of  Joseph Mukan, the Commissioner of Police.

The PPRO added the shot teenager was responding to treatment at an undisclosed hospital in the state.

Omoni in his statement, “when the information got to us  the police officer was disarmed and detained in the state Criminal Investigative Department and an investigation is currently ongoing as ordered by the CP, also the 19-year old boy is currently receiving treatment at an undisclosed hospital.”

Meanwhile, It was learned the 19-year old boy had successfully undergone the first surgery and awaiting two more surgeries as stated by the doctor before the boy can walk again.