RIVERS MONARCH JAILED ONE MONTH FOR SHOUTING ON JUDGE THREATENING ,OTHERS 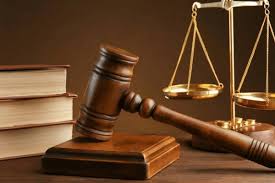 A High Court sitting in Port Harcourt, Rivers State, has jailed one Chief Vincent Nnamdi-Otto for one month for contempt of court

NEWSNAIJA learned Nnamdi Ototo, who is a  monarch, while responding to cross-examination from the witness box on a disputed land suit, raised his voice at the presiding judge, requesting to know his interest in the matter.

It was learned that  Ototo, while further responding to question on if he was aware of an interim order of injunction restraining him from interfering with the land in dispute at Elelenwo, near Port Harcourt, claimed that he was not aware of such an order.

The Monarch further said he knew his opponent, whom he described as a villain, and that the court was tolerating him.

Not done, the chief walked out of the witness box, hit his palm on the floor, and threatened to deal with the judge and his opponent , as well as to petition the President, Muhammadu Buhari, and an unnamed minister.

Justice Adolphus Enebele,  the  presiding judge, after watching the drama for a while, ordered that Nnamdi-Otto be put back in the witness box and should show cause why he should not be committed to prison for contempt.

Justice Enebele, after listening to the presentation from the lawyers, who condemned his attitude, sentenced him to one-month imprisonment before adjourning the substantive matter till May 17, 2021 for the continuation of cross-examination.