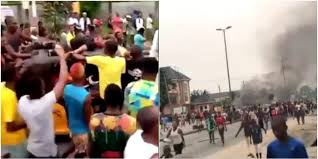 Rukpokwu community, in the Obio/Akpor Local Government Area of Rivers State, has been  on fire since Thursday as youths protest against the killing of a tricycle rider by a policeman

The victim, identified as School Boy, was said to have been shot dead by the trigger-happy cop around 6 am after a brief altercation between them.

Youths in the area told our source that the policeman demanded an N100 bribe and the tricycle rider refused to give him, saying it was too early in the day.

The resident, who refused to mention his name, noted that the policeman became angry by the response of the rider and shot him.

He said, “Around 6 am, the police came in their van and one of them demanded N100 from School Boy, but he said he didn’t have and that he was just starting work for the day.

“The policeman became angry and shot him, killing him instantly. We would have trapped the policeman down, but he escaped.”

The incident was said to have triggered a protest, as angry youths took the corpse to the Rumuokoro Police Station despite gunshots being fired by the policemen.

A Keke rider, who gave his name simply as Ugo, said three more persons were hit by stray bullets in their legs and were rushed to the hospital.

Ugo, said, “I was in front of my compound washing my Keke when someone informed me that the police were chasing Keke riders. Then I heard that the police shot and killed School Boy. Because of that, youths came out to protest and we took the corpse of the man to Rumuokoro Police Station. The police started shooting; they shot three boys in their legs. The injured victims have been taken to hospital for treatment.”

Nnamdi Omoni,  a  spokesman for the state police command, confirmed the incident, adding that the cop had been disarmed and detained