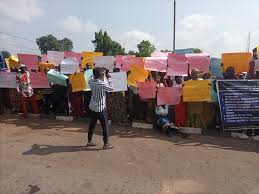 Members of the Ndiowu community in the Orumba North Local Government Area of Anambra State, on Monday, staged a protest at the Government House, Awka, alleging leadership imposition and impunity by certain persons in the community.

The protesters said several attempts to enthrone a leadership structure in the community had been frustrated by those they called a cabal.

The protesters gave the state government 14 days to address the issue to avoid a breakdown of law and order.

Their leader, Obiora Mgbemene, said, “After several meetings and deliberations on the ugly happenings in our town, we the entire members of the Ndiowu community deem it necessary to formally stage a peaceful protest to the Government House, Awka, to furnish the government with information on the unpleasant situation in our community.

“We have also viewed with dismay the conduct of some individuals from our town, who are bent on holding Ndiowu to ransom with their actions and activities before, during, and after the last three botched elections conducted under an atmosphere of peace.

“This cabal had boasted repeatedly that with their connections in the State House, no matter the number of times these elections are held, they would scuttle them unless their imposed candidate emerges as the president-general.

“The absence of a traditional ruler and a substantive town union executive has further compounded the issue.

“It is, therefore, against this backdrop that, we, members of Ndiowu, wish to call the Anambra State Government to assist us to address this concern as we are fast losing our patience.

“All forms of the imposition of candidates during elections in our community must stop. Our prolonged silence and non-violence after five years of non-performance of the caretaker committee should not be mistaken for cowardice.

“If these critical issues are not addressed within an anticipated time of 14 days by the state government, we may no longer guarantee peace and order in Ndiowu. Enough is enough.” He added.

Addressing the protesters, Prof. Solo Chukwulobelu, the Secretary to the State Government, commended them for their peaceful conduct.

Chukwulobelu said he would forward their petition to the Commissioner for Local Government, Chieftaincy and Town Union Matters for appropriate action.