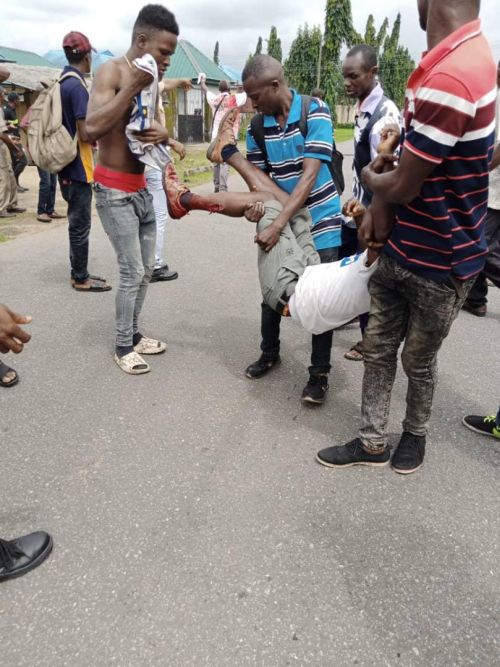 A long standing quarrel between Julius Berger and some of its Rivers State workers took a deadly turn when a police officer allegedly opened fire on the protesting workers, killing one and injuring four others.

While seeking justice for Samuel Ajayi, the victim, the employees stated that the killer cop was assigned to the state police command’s Bori Police Division.

According to the protesters, who met with the Chairman of the state’s Gokana Local Government Area on Tuesday, The late Ajayi was among those shot when protestors went to the council secretariat on a peaceful protest over the construction company’s ill-treatment of them.

Moses Oniron, one of the workers said “After they (policemen) restricted us from gaining access to the company’s premises yesterday, we felt it was necessary to go to the council secretariat to submit our complaint”.

“As we were walking to the council, the cops followed us. When we arrived at the secretariat, the chairman was not in the office, but his secretary greeted us and addressed us before we departed.

Oniron said “As we were leaving the council buildings, we were attacked by these police officers and Julius Berger’s Chief Security Officer.

“A Divisional Police Officer from Bori Police Station fired a shot at us, injuring five people.”

“We are appealing to the Federal Government, Rivers State Government, Gokana LGA Chairman, and other stakeholders to assist us.”

The deceased’s cousin, identified as Dominic Adeyemi, said his family was in deep pain.

Adeyemi made it known that the late Ajayi had five children, Adeyemi further stated that he was the breadwinner of the family and had many people that he catered for.

He claimed “I didn’t see any of them yesterday” (Julius Berger and police). On top of that, I was manhandled. They tried to take the documentation I needed to place his body in a mortuary”.

The Chairman of Gokana LGA, identified as Confidence Deekor, has urged the state police command to conduct a thorough inquiry into the incident.

He vowed to meet with Julius Berger’s management and workers to settle the crisis.

“Perhaps someone was hit by a bullet fired from elsewhere because there are cult activities in the vicinity.

The DPO continued “So, if cultist bullets hit someone, some people want to use this opportunity to spoil my good name because I am well-known throughout Ogoni land for bringing peace there? This is something the press should look at as well”.

As of the time of reporting this story, the state Police Public Relations Officer, Nnamdi Omoni,  had not returned calls or responded to a text message sent to him.