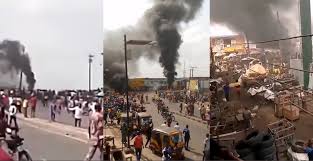 There was unrest at the Agodi Gate area of Ibadan, Oyo State, on Tuesday, following a clash between some motorcyclists and warders at the Agodi Correctional Centre.

NEWSNAIJA learned the clash led to the burning of the Idi Ogungun Police Outstation by some angry youths, while another police station opposite the center was reportedly damaged.

NEWSNAIJA further learned that a motorcyclist was shot by one of the warders, but some eyewitnesses alleged that the teargas canister, which the warder held, exploded and injured the motorcyclist in the face.

Some of the traders, who have shops in the area, told our source that the victim was shot by the prison officials following his refusal to pay a bribe of N50.

One of the traders,  identified as Dauda Abegunrin, told our source that prison warders always extort okada riders, who usually park close to the facility to pick passengers.

He said the alleged shooting of the motorcyclist was said to have angered his colleagues and youths in the area, who made bonfires on the road, which made motorists avoid the area.

This reportedly caused a clash as commuters, motorists and passers-by ran helter-skelter.

Abegunrin further stated that  “One of the warders demanded N50 from an okada rider, but that one said he could not give a bribe because he was a Muslim. The warder later dragged him inside and shot him. This led to a crisis in the area.”

Also, another trader in the area claimed that the refusal of the okada rider to give the warder the N50 bribe caused the clash.

It was not clear if the motorcyclist died or he was just injured, but some people said he had been taken to hospital.

Policemen and operatives of Operation Burst, comprising soldiers and other security agents, were deployed in the area to restore normalcy following the violence.