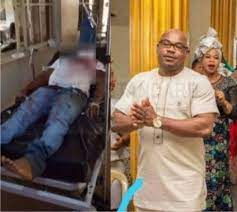 Abutu Yaro,  the  Imo State Commissioner of Police, has ordered a full probe into the alleged killing of a Germany-based Nigerian,  identified as Oguchi Unachukwu, by the personnel of the 211 Regiment of the Nigerian Air Force.

Oguchi, who was on his way to catch a flight at the Sam Mbakwe International Cargo Airport, Owerri, to Lagos for a connecting flight to Hamburg, Germany, was allegedly shot dead by Air Force personnel at a checkpoint close to the airport on May 31, 2021.

The wife of the deceased, simply identified as Ijeoma, had called on the Commissioner of Police to make sure that her husband’s killers did not escape justice.

The CP revealed on Monday that he had ordered a thorough investigation into the killing.

Yaro , in a statement by the command’s spokesman, Bala Elkana, gave an assurance that his office would make sure that justice was served.

The statement partly read, “The Commissioner of Police, Imo State Command, Abutu Yaro, has ordered a comprehensive investigation into the conditions surrounding the death of one Oguchi Unachukwu near the tollgate of the Sam Mbakwe International Cargo Airport, Owerri, on May 31, 2021, around 8.04 am.

“The deceased was alleged to have been shot by personnel suspected to be staff of the 211 Regiment of the Nigerian Air Force responsible for the security of the international airport.

The deceased was said to be on his way to catch a flight to Lagos. A survivor stated that one of the Air Force operatives shot at Oguchi’s car when he failed to stop at the checkpoint after they had flagged him down.

“Following the information, the Air Force team at the tollgate, which was already on red alert, especially considering the recent killing of a high-profile politician around the same area, stopped a fast approaching Mercedes Benz vehicle.

“They flagged down the vehicle and ordered the driver to park by the roadside for a search, but the driver, who at first slowed down and pretended to move to the side of the road, suddenly took off.

“According to the Air Force, being suspicious of the mission of the occupants of the said vehicle at the international airport, they made efforts to demobilize the vehicle. When the vehicle eventually came to a stop, the operatives surrounded it and ordered the occupants out.

“It was at this point that a female passenger in the car mentioned that the man driving the vehicle was her husband and that he was rushing to catch his flight. He was, however, rushed to hospital by the Air Force team for medical attention, where the doctors on duty made efforts to stabilize him. He later died around 7 pm on the same day.

“The Imo State Police Command has begun an investigation into the case. The Commissioner of Police called for calm and assured the family and friends of the deceased that no stone would be left unturned in unraveling the circumstances surrounding the death. Members of the public will be updated on the outcome of the investigation.”