POLICE SACK SINGLE FEMALE COP FOR GETTING PREGNANT OUT OF WEDLOCK 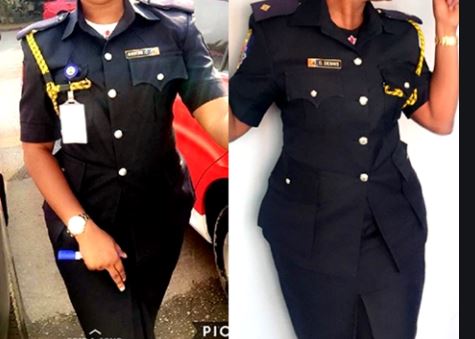 A female corporal, identified as  Olajide Omolola, who was sacked by the police for getting pregnant out of wedlock has left Nigerians talking.

They slammed the Nigeria Police Force over what they called a discriminatory law and called on a rights group to fight for the woman.

The police, in a wireless message with reference number CJ:4161/EKS/IY/Vol.2/236, DTO:181330/01/2021 obtained by PUNCH Metro, said Omolola was dismissed for getting pregnant while unmarried.

NEWSNAIJA learned the signal came from the Department of Finance and Administration in Ado Ekiti and was addressed to the Divisional Police Officer at Iye Ekiti, where Omolola was based.

The chief financial officer in Ekiti was requested to communicate the information to the Integrated Personnel and Payroll Information System to make sure her salary was stopped.

The document read, “Section 127 of the Police Act and Regulation against women police getting pregnant before marriage; W/PC (woman corporal) Olajide Omolola passed out of Police Training School on 24/04/2020 attached to yours, breached above provisions.

Our source, however, gathered that the aspect of the Act relied on to validate the sacking had been revoked in the amended police Act signed into law by the President, Major General Muhammadu Buhari (retd.), in September 2020.

Part of the old law, which has been revoked, also made it important for policewomen to seek the permission of their superiors before getting married.

Dr. Innocent Chukwuma,  a  champion of police reforms in Nigeria, who is also the Regional Director for Ford Foundation, West Africa, confirmed that the aspect of the Act which barred unmarried policewomen from getting pregnant had been revoked.

However, Chukwuma, said the law had not yet been published, hence the ignorance of its provisions by the police.

“But it doesn’t mean it should not be upheld. Gazette is just an administrative process. It involves officially publishing and making it available to all stakeholders and government establishments. Until that is done, they are usually reluctant to uphold the law,” he added.

He said, “It was Police Act Section 124 that was repealed by the court, not Section 127. Section 127 still stands. Section 124 talks about women police taking permission from the commissioner before getting married. Section 127 says any police officer who is unmarried and eventually gets pregnant shall be disengaged from the Force. It is in the police act and regulation. It is a regimented organization and we have our rules and regulations which everyone must comply with.”