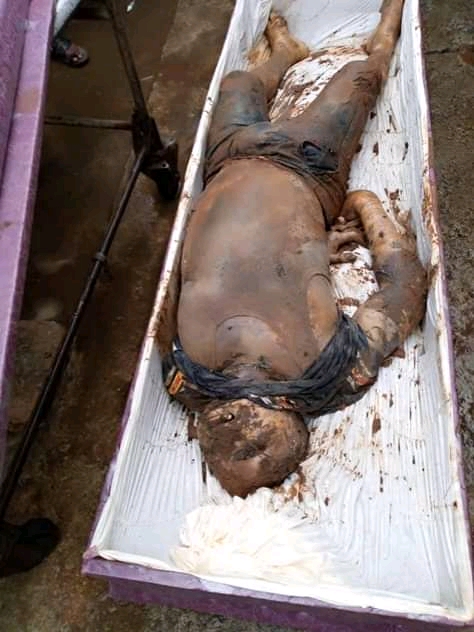 The Anambra State Police Command has retrieved the decomposing corpse of a  man identified as Henry Okam, aged 34 in Okija, in the Ihiala Local Government Area of the state.

The police were said to have arrested three suspects, identified Obasi Ezinne, Ntomchukwu Anabaraonye, and Abuchi Obinna in connection with the murder.

Newsnaija learned that the suspects kidnapped the victim on August 30, 2020, and killed him.

It was also learned that the men later buried the corpse in a shallow grave.    ,,

Haruna Mohammed, The state Police Public Relations Officer, in a statement on Sunday, said operatives of the state Special Anti-Robbery Squad arrested the suspects on September 5, 2020, noting that a rifle was recovered from them.

Mohammed, said, “The suspects had on August 30, 2020, allegedly kidnapped one Henry Okam in Ihiala LGA of Anambra State. Whom they also killed with a pump-action rifle and afterward buried him in a shallow grave.

“Meanwhile, the four suspects voluntarily confessed to the crime and took the operatives to a thick forest in Ihiala, where the decaying body of the victim was exhumed and dogged up to the mortuary for an autopsy after it was certified dead by a medical doctor.

Also, the gun used by the suspects in carrying out the crime, including the victim’s phones, were also retrieved from them and registered as exhibits.