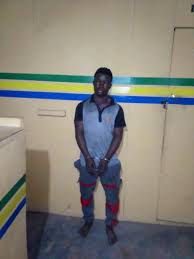 The Niger State Police Command has arrested two suspected ritual killers in Daza village, in the Munya Local Government Area of the state.

The suspects, Buhari Ibrahim, 35, of Daza village, and Bitrus Imoh, 29, of Geneko village, in the Koton Karfe Local Government Area of Kogi State, were arrested by police operatives attached to the Gwada division in Munya.

NEWSNAIJA gathered that lmoh exhumed the body of his late brother buried recently and removed his eye, which he sent to Ibrahim for the latter to prepare a charm for him.

it was learned that the charm he requested was to enable him to have supernatural powers to manipulate people.

Our source was told that Ibrahim, who was first arrested, led officers to Imoh.

Ibrahim told our source that Imoh approached him and sought supernatural powers.

He said “As an herbalist, I know what is needed to get the charm.  I told him to go and get a human eye for the job. But I never knew that what he brought was his late brother’s eye. It’s unfortunate.

“My work requires a lot of things. It all depends on what the person wants and I will tell you step by step how to succeed. But if you derail or you refuse to adhere to my instructions, you are bound to fail,” he added.

Wasiu Abiodun,  The command’s spokesman, said the suspects would be charged to court after the conclusion of the investigation.