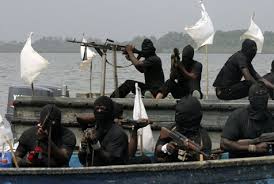 News reaching us says Suspected pirates have hijacked a commercial passenger boat travelling from Port Harcourt to Bonny, in Rivers State, and abducted two passengers on board.

The incident, according to an eyewitness in Bonny, happened around 10 am in the Isaka area of the Bonny Port Harcourt waterway, Okrika Local Government Area of the state.

The eyewitness, who spoke on condition of anonymity, said that two passengers, whose identities had yet to be unknown as of press time, were taken away with the boat, while other passengers were dropped near a creek.

He said  “The pirates also carried two persons away with the boat; we don’t know their names or where they are from or where they were taken to, but everyone on the boat was headed for Bonny adding that most of the criminals terrorizing the Bonny Port Harcourt waterway were recently chased from the Andoni Local Government Area by security personnel.

The source stated that “Most of the pirates disturbing the Bonny waterways now were operating in the Andoni area, but because of the increased security presence there, they have now moved to the Okrika territorial water and causing all these problems,”.

Nnamdi Omoni,  the spokesman for the state police command, could not immediately confirm the incident, but promised to get back to our correspondent with details, but had yet to do so as of the time of filing this report.