Pastor Who Was Arrested For Sodomy Defiles Inmates 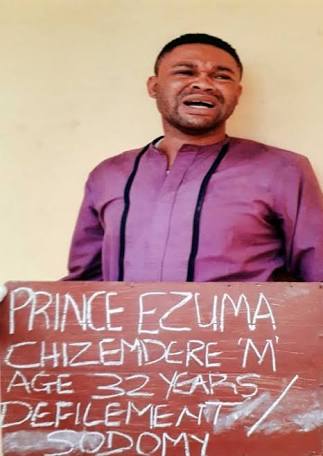 Rev.Chizemdere Ezuma the founder of Jesus Intervention Household Ministry, Ejigbo, Lagos, who was recently arrested on sodomy charges tried to sexually assault an inmate in the same cell with him, at the Lagos State Police Command headquarters in Ikeja.

Police officers were alerted by the voice of the inmate whom Rev Ezuma aws trying to molest. He was immediately relocated to another cell in solitary confinement under close watch till the next morning.

“All the policemen on duty that night were amazed when the suspect complained that the pastor wanted to molest him. The suspect said the pastor was romancing his legs and when he was awake, the pastor gestured for him to come close,”.
“He was taken to another cell that night and was kept under watch. He had been arraigned for sexual harassment.A boy (Shedrack) whom he was sleeping with was also charged with prostitution. The boy confessed to have slept with a lot of men in exchange for money.“