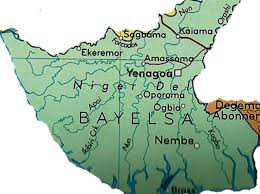 Mike Okoli, the state Commissioner of Police, paraded the suspects, which included 25 males and two females, at the command headquarters in Yenagoa on Wednesday.

Okoli said crack investigative teams of the police nabbed the suspects at different locations in Bayelsa, Rivers, and Akwa Ibom states between December 2020 and January 2021.

Among them were members of a four-man gang Sunday Essien, Michael Clifford, Apena Akpabio, and Ondogha Ebi who reportedly killed the driver of a Toyota Sienna they hired to drive them to Port Harcourt from Yenagoa in November 2020.

Okoli, who noted that the command acted on the report of a missing person, said, “On getting to Okobe community along Ahoada-Port Harcourt (East-West) Road, they instructed the deceased to park the vehicle so they could ease themselves.

“The decomposing remains of the victim were recovered and deposited at the Federal Medical Centre mortuary. The suspects have confessed to the crime and they will soon be charged to court,” he added.