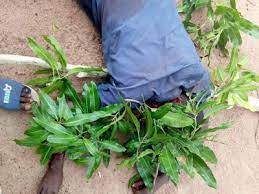 News Reaching us says suspected herdsmen on Tuesday evening killed a man and his wife at Udei branch in Mbabai council ward of the Guma Local Government Area of Benue State.

Locals said the incident happened when the man who was a farmer identified as Igba Faga and his wife were on their way home from the farm.

The local who simply identified himself as Terna, said, “The incident happened on Tuesday evening; the couple was returning home from the farm when they met some Fulani herdsmen on the road, and without provocation, they hacked the couple to death.”

Paul Hemba, the Security Adviser to the Governor, a retired colonel, confirmed the attack.

He further explained that the couple, who were on their motorcycle and going home, had died on the spot, and their remains evacuated by their family members for burial.

Catherine Anene, the Police Public Relations Officer,  When contacted said she had yet to get the report.