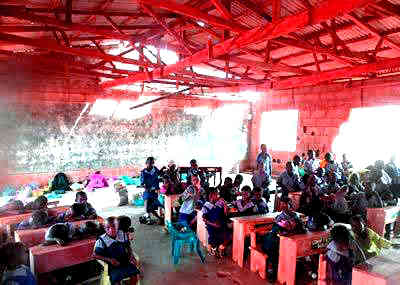 News reaching us says a classroom building of Nazareth High School, located in the Imeko-Afon area of Ogun State has collapsed and one student killed.
NEWSNAIJA learned two other students were also injured in the building collapses.
The Councilor of Imeko Ward, known as Samuel Ojoawo, confirmed the incident.
NEWSNAIJA further learned that the building suddenly fell on the three students, killing one of them, known as Ilebiyi, on the spot, while the remaining two sustained injuries.
The injured students were taken to hospital for treatment, while the deceased was said to have been buried, according to Islamic rites.
According to the councilor, one of the two survivors of the incident sustained minor injuries, while the other was responding to treatment at the hospital
The Councilor said, “The incident is highly discouraging and touching. Three girls were involved in the incident, one dead and two injured.
One of the injured two victims sustained very minor injuries. The other one was taken to the hospital. I went there and she’s responding to treatment. She is better now.”
The Councilor further explained that the present administration of the council had ordered the total demolition of the building involved.
When contacted, the Police Public Relations Officer in the state, DSP Abimbola Oyeyemi, said he had not been briefed.