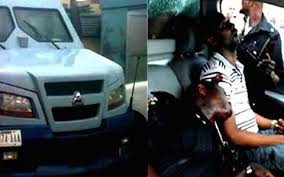 At least one person has been killed after some armed robbers attacked a bullion van on Ado Road in the Ajah area of Lagos State.

NEWSNAIJA learned that the robbers attacked the van around 3 pm on Thursday and went away with a huge sum of money.

NEWSNAIJA also gathered that the gunmen first fired at the van from a distance, but the driver refused to stop till he got to Blenco Supermarket.

A clip of the robbery that went viral on social media revealed the robbers pumping bullets into the van to open the lock.

Other videos taken after the robbery showed a suspected casualty of the attack on the floor.

On Twitter, some witnesses and residents shared their experiences.

A witness @Simisoula, claimed that the robbers escaped with the money.

@Simisoula,  tweeted, “Armed robbers just robbed Blenco’s ATM bullion van (Ado Road, Ajah) just now. Raining bullet with Blenco police. They made away with the money and scattered the rest on the road. People are picking money right now on the road. Pls, stay indoors if you are in that axis.”

A resident @MerrymaryTom, said a security guard was injured and rushed to a hospital in the neighborhood.

Another eyewitness @vlQtoOoR, said, “From what I saw, these guys were in a milk-colored vehicle, pursuing a bullion van. They shot the tyres, but the van escaped then they hovered around Blenco area before entering the premises. I watched this from the seaside just opposite Blenco.”

However, Hakeem Odumosu, The state Commissioner of Police, said he had yet to be fully briefed, adding that he could not comment.