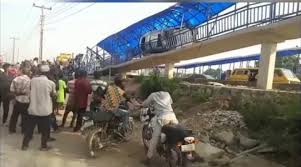 One person has been confirmed dead after a vehicle climbed a pedestrian bridge at the Shogunle end of the Lagos-Abeokuta Expressway.

NEWSNAIJA learned that the incident, which happened around 12 am on Sunday, left many others injured.

A clip of the incident, posted on an Instagram platform, Instablog9ja, showed residents making frantic efforts to rescue the victims.

The person who recorded the clip stated that the occupants of the vehicle were on their way to a party when the incident happened.

He said, “The person who drove the car is a learner. The owner of the car gave it to his friend that was a learner. They were high and going for a party, and while driving carelessly, the driver left the road and bumped into the pedestrian bridge and it went up like that.

“It was not up to two minutes that I left the spot that this incident happened and the sound I heard was not a normal sound and when I got back, I saw what happened, with head scattered on the floor.”

Nosa Okunbor, The Head of Public Affairs Unit of the Lagos State Emergency Management Agency, and Muyiwa Adejobi,  the state Police Public Relations Officer, did not take their calls when contacted for comment.