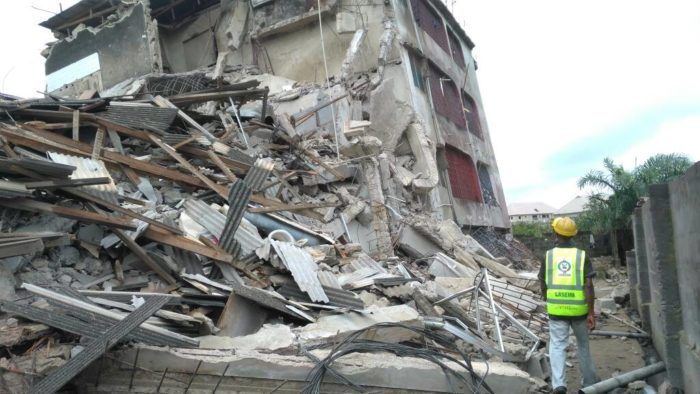 One person has been confirmed dead, while four others sustained varying degrees of injury as a one-storey building collapsed following a thunderstorm in Asaba, the Delta State capital.

NEWSNAIJA  learned that the building located behind the Police Officers’ Mess in Okwe, Oshimili South Local Government Area of the State.

The building, which said to be owned by  a 79-year-old Group Captain Sam Akariwa (retd), was still under construction and collapsed while workers were still on the site, leaving one person dead and four others injured.

Mr Daneil Okpor, The Director-General, Delta State Emergency Management Agency, said at the scene of the incident that the building collapsed as a result of structural defects.

Okpor,  stated, “We got a call about a building collapse in Okwe this evening (Saturday) and we came here and discovered that the local government chairman had swung into action by mobilizing everyone to rescue those trapped.

He said “We  also gathered that thunder accompanied by lightning struck and that  was what made the building to collapse. That could play a role in the collapse, but the structural work of the building is very poor.

He further stated tha“Five persons were trapped and we were able to rescue all of them; they are now receiving treatment in hospital; only one person is confirmed dead. As we leave here, we are going to hospital to know the condition of the injured.”

Mr Uche Osedebe, The Chairman of the local government council, attributed the collapse of the building to structural defects and lack of professional expertise.