ONE DEAD, 16 RESCUED AS BOAT CAPSIZES IN LAGOS 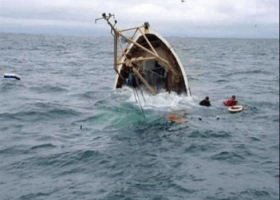 One person has been confirmed dead after a boat sank on Monday around the Adekunle Waterfront area of Lagos State.

NEWSNAIJA   learned that the 16 other passengers onboard the commercial boat were rescued after it sank not long after it left the CMS terminal.

It was further gathered that the boat was heading for Ikorodu when it hit a rock around 5pm.

The Area Manager of the National Inland Waterways Authority, identified as  Sarah Braimah, who confirmed the incident to our source, said the victim died on the way to a hospital.

The waterways Manager said, “A 17-passenger boat named TEMI 3 Global which departed CMS Ferry Terminal at 4.35pm en route to the Ikorodu Ferry Terminal on September 27, 2021, was involved in an accident.

“Fifteen minutes into the journey, near Adekunle Waterfront, the boat hit an underwater obstacle which broke the body of the boat and this resulted in the sinking of the boat.

“There was instant  deployment  to the site of the incident by the National Inland Waterways Authority Search and Rescue Team, LASWA, Marine Police, fishermen and other boat operators leading to the rescue of 16 persons alive while one person died while on the way to a hospital.”

Farinloye, said, “A passenger boat from the Lagos Island sailing to Ikorodu sank around the Adekunle Jetty with 17 passengers; there was one casualty. The boat hit a rock while sailing close to the edge of the waterway.”