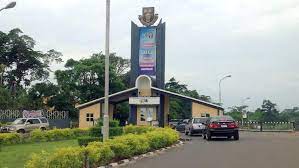 A guard in the security department of the Obafemi Awolowo University, Ile Ife, Osun State, identified as  Fisayo Oyeniyi, has reportedly committed suicide.

NEWSNAIJA gathered that the deceased hanged himself in his apartment located along Ifewara Road, Ile-Ife.

His dangling body was later discovered by other tenants in the house.

Sources in his department said he did not show any sign of depression.

However, our source learned that the deceased sent out messages to his immediate family members a few hours before he committed suicide, saying he was fed up with life.

Abiodun Olanrewaju, the spokesperson for the varsity, confirmed the incident.

He said the university mourned the deceased, whom he said worked as a casual worker in the security department of the school.

Olanrewaju, said, “From what we learned, he sent messages to his mother and wife, together with the children, complaining of lack of interest in living.

“He left the office and did not allow anybody to suspect him. Almost four hours after he sent the texts, he committed suicide. They just found his body dangling in his apartment.

It was further gathered that the deceased was not living with his wife and children. His family lives with his mother.”

Yemisi Opalola,  the state Police Public Relations Officer, said the matter was not reported to the police.