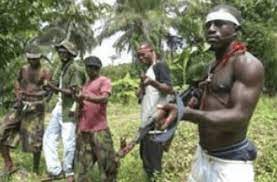 At least four persons have lost their lives when gunmen suspected to be cultists invaded Dema and adjoining communities in Andoni Local Government Area of Rivers State in what is believed to be a rival clash.

This is coming about two weeks after the leader of the Movement for the Emancipation of the Niger Delta known as Etengo was reportedly killed by some a cultist in the area.

In a separate development, the state Police Command said its operatives shot and killed two suspected cultists after the miscreants engaged the police team in a gun battle.

The gunmen were said to have stormed the communities in about 10 speed boats, shooting sporadically, leaving four persons dead, even as some locals name the identified the invaders as Icelanders cult group.

An eyewitness from the area said residents ran helter skelter   for safety during the heavy shooting in some communities in the area by the hoodlums.

He said “This morning, we heard some sounds of guns. They were shooting at Ajakajak, Samanga, Ibute-Irem and Dema. Everybody is running helter-skelter and there are no security personnel here. They came with about 10 speed boats with ammunition.

“So, I am asking the government to come to our aid by sending security personnel. People are dying and many running all over and hiding,” the source stated.

Another resident, who pleaded anonymity, said about four persons, two women and two young men lost their lives, saying none of the dead victims were involved in the cult clash.

What we are recording now is four; two women and two boys. They were not involved in any cult issue; they came with about 10 speed boats, shooting from morning till around 10 pm,” he stated.

Reacting to the Andoni attacks, Nnamdi Omoni, the spokesman for the state Police Command, said its operatives and men of the Nigerian Navy had been deployed to restore normalcy.