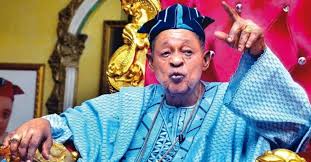 Oba Lamidi Adeyemi III, the Alaafin of Oyo, has died.

According to palace authorities, the senior Yoruba monarch died in the late hours of Friday.

According to the Punch, Adeyemi died at the Afe Babalola University Teaching Hospital in Ado Ekiti.

Prince ‘Tunde, the late Alaafin’s first son, and other children

According to palace authorities, traditional procedures has begin,

but no details about his funeral arrangements is reveal.

Before his death, Adeyemi reigned for 52 years, making him the Alaafin with the longest reign.

According to custom, the head of the Oyomesi, Basorun of Oyo,

Until a new Alaafin, High Chief Yusuf Ayoola will take over.

The late Alaafin of Oyo came from

the Alowolodu family’s Adeyemi branch. On October 15, 1938,he was born.

He spent some time at Iseyin during his late childhood.

Oba Adeyemi II, the former Alaafin of Oyo who

was ousted and exiled in 1954 for sympathizing with

the National Council of Nigerian Citizens, was Adeyemi III’s father.

He was a boxing fanatic.

After the deaths of the Soun of Ogbomoso, Jimoh Oyewumi,