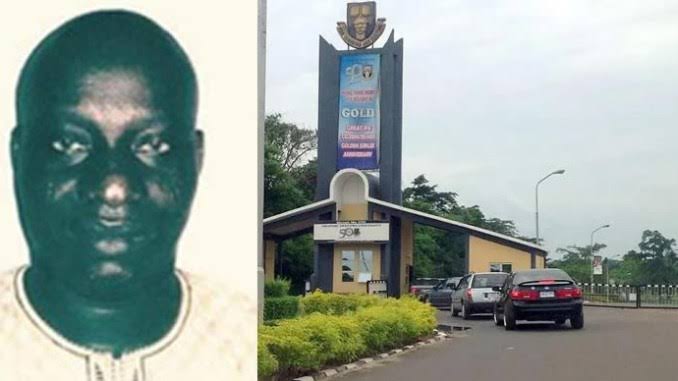 The authorities of the obafemi Awolowo Unversity (OAU)  ), Ile-Ife, have FIRED  a senior lecturer at the Department of English,  identified as Adebayo Mosobalaje, for allegedly sexually harassing a former student of the institution.

NEWSNAIJA learned this is coming barely two weeks after exclusively report that an attempt by the university management to give Mr.  Mosobalaje, soft landing based on the recommendations of the university’s senate to the governing council.

NEWSNAIJA further learned that the  university announced the lecturer’s dismissal through a statement issued on Tuesday afternoon by its public relations officer, known as  Abiodun Olarewaju.

The statement reads in part: “In its avowed determination to rid the university of any form of sexual intimidation, harassment and, or coercion, the Governing Council of Obafemi Awolowo University, Ile-Ife, has dismissed another lecturer who was found guilty of sexual demeanor against a female student.”

The statement added that the “decision to dismiss Dr. Adebayo Mosobalaje of the Department of English Language in the Faculty of Arts, was taken by the University Council at its last sitting that was held on Monday and Tuesday, September 6 and 7, 2021.”

“Having carefully reflected on the report of the Joint Committee of Council and Senate, which examined  the case of sexual harassment against Dr. Mosobalaje, the University Council, clearly  declared its zero tolerance for sexual harassment in any form  and, accordingly, applied the appropriate university sanctions for such an offence as contained in the university regulation,”.

NEWSNAIJA learned that on August 25, a newspaper reported the allegations against Mr.  Mosobalaje, who is popularly called “Mosob” on th campus, and how the institution’s Senate had attempted to bypass the law by recommending lesser punishment for the accused official.

It was also learned that the  lecturer was specifically accused of breaching the provisions of the university’s Code of Conduct “in the manner he related with a student of the department,  identified as Rachel Momoh.”

A verdict passed by the university’s joint committee of council and senate noted that “in the process of its deliberations, the Committee FOUND Dr.  Mosobalaje culpable and was deserving of the highest punishment of dismissal.”

but in its recommendations, many feel the committee was lenient with the lecturer as his punishment included a warning letter, and forfeiture of accumulation of half of his salaries which have been continued to be held by the university since he was suspended.

The committee also said he should not be allowed to hold any management position on the campus for the next five years.

Also, he will not be promoted for two years.

These recommendations, which formed a subject of debate at the Senate meeting of the university three weeks ago, led to a division among members in attendance.

While some endorsed the recommendations, others queried the reasons behind the committee’s alleged inconsistency.

They asked why the committee allegedly ‘bent the rule’ when it already concluded that Mr.  Mosobalaje’s culpability “was deserving of the highest punishment of dismissal.”

In exercising its power as the supreme organ of the university, the university’s governing council under the chairmanship of businessman, Oscar Udoji, overruled the senate and opted for what many described as the deserving punishment for the lecturer.