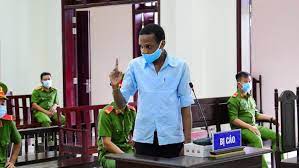 A Nigerian footballer, identified as  Theophilus Ugwu has reportedly been sentenced to death for smuggling nearly six kilos of methamphetamine from Cambodia to Vietnam.

According to the report gathered, Theophilus Ugwu was charged with “illegal trafficking of narcotic substances” by the People’s Court of the Western province of Tay Ninh, Vietnam through the account of Instablog9ja, the police found Ugwu transporting 12 bags containing meth from Cambodia to Vietnam in Tay Ninh’s Ben Cau District on March 8.

The meth weighed around 5.92 kilograms. Ugwu said he came from Nigeria to Cambodia in February last year as a soccer player. But in March, he became acquainted with another African, who promised to help him play for a famous Cambodian club.

On the day he was caught, the man hired Ugwu to deliver a bag containing the drugs from Phnom Penh to Ho Chi Minh City (HCMC) — Tay Ninh borders both HCMC and Phnom Penh.

Ugwu accepted the deal and got $1,000, but was eventually busted by police as he tried to smuggle the drugs into Vietnam through less-traveled paths. In court, Ugwu said he did not know the bag contained drugs.

In other news published by FLvibe.com, the Economic and Financial Crimes Commission (EFCC) says it is not compulsory for Nigerians to have bank accounts in the wake of the influx of fraudulent activities in the banking sector.

Moreover, the EFCC has cautioned against people using mere phone numbers to open their bank accounts. “Nearly 40 percent of Americans do not have accounts. So, it is not very compulsory for everybody in Nigeria to have a bank account,” said Bawa Usman, zonal head of the EFCC in Sokoto.

He made this disclosure after his outfit had a meeting with heads of the various banks in Nigeria to see how best they can collaborate to minimize the fraud being on the rise in the banking sector in recti times. According to him, insiders facilitate most financial frauds in the banking industry