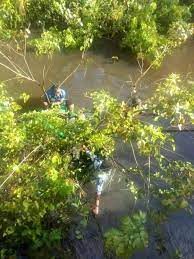 Not less than five persons lost their lives while some others sustained injuries in a road accident that occurred along Akure-Ondo Expressway on Sunday.

However, the real cause of the accident has not been ascertained as of the time of filing this report.

It was gathered that the bus was heading towards Akure, the Ondo State capital, from Lagos State when the crash happened at Aponmu village in Akure South Local Government of the state.

According to an eyewitness, the driver of the vehicle lost control and swerved off the road, and fell from the bridge into the river.

NEWSNAIJA learned that among the victims was a couple, who just got married on Saturday at a registry in Lagos State and were going to Akure for the preparation for an introduction and engagement scheduled to come up next Saturday.

The groom was said to have died while the bride was seriously injured and was currently receiving treatment at the hospital.

Abiola Fadumo, the  Public Relations Officer of the State Sector Command of the Federal Road Safety Commission, confirmed the accident but said there was no detail yet as the rescue operation was still ongoing as of the time of filling this report.

The remains of the dead victims had been deposited in the morgue of the University of Medical Sciences Teaching Hospital, Akure, while the injured had been admitted into the hospital.