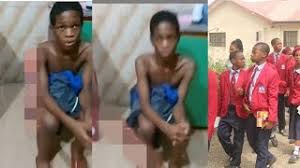 An Akwa Ibom Magistrates’ Court sitting in Uyo, on Wednesday, has started afresh the trial of suspects in the alleged molestation and maltreatment of an 11-year-old JSS1 student of the Deeper Life High School, by two senior students and some school officials.

NEWSNAIJA learned that the magistrate, who started the trial of the two minors on January 20, 2021, behind closed doors, had been transferred.

The new magistrate read the charges afresh to the minors, who pleaded not guilty.

She adjourned the case till March 3, 2021, for further hearing.

Speaking to journalists after the proceedings,  David Okokon,  the counsel for the complainant, explained that the trial could not continue from where it stopped because of the transfer of the magistrate, who started it.

Okokon,   stated, “Today was supposed to be for cross investigation of the nominal complainant, who is the mother of the molested child. Since the former magistrate was transferred, a new magistrate had to start afresh. That is the process since the case has not gone far.

“The new magistrate said they should remain on the existing bail, because already they are on bail, and then adjourned the matter till March 3.