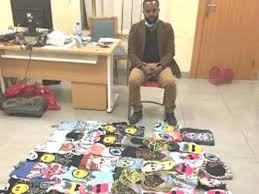 The National Drug Law Enforcement Agency( NDLEA)  has arrested a man identified as  Ukaegbu Onyekachi with a 3.30 kilogram of cocaine at the Murtala Mohammed International Airport, Lagos State.

NEWSNAIJA learned that Onyekachi, who arrived from Sao Paulo, Brazil, via an Ethiopian airline, was accosted on Monday during an inward clearance of passengers of the airline at the E Arrival Hall of the airport.

The airport commander of the NDLEA, Ahmadu Garba, in a statement on Tuesday,

Garba,  said, “The hard drug was wisely  concealed in T-shirts stickers, but he couldn’t escape the eagle eyes of our detectives.”

The Airport Commander said he will be punished accordingly.