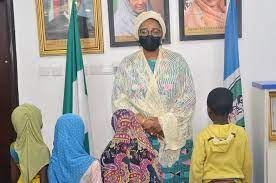 Operatives of the National Agency for the Prohibition of Trafficking in Persons, have rescued four stolen children.

According to Nezan, the arrest follows a tip-off from a media partner, who alerted the agency to the activities of the suspect, especially around the popular AYA bus terminal, Abuja.

The operation was said to have led to the arrest of one of the group’s members, Blessing Eze, from whom four stolen children were rescued.

The statement read in part, “A total of four stolen children believed to be from different parents were also recovered from the suspect and many other children are believed to be at large.

“The development represents a major feat in the agency’s drive to curb the incidence of child trafficking, especially within the nation’s capital.”

The statement added that the agency had launched a manhunt for a suspect, Mama Chioma, from Enugu State, believed to be the major supplier of children to the gang and currently in possession of four more trafficked children.

It added, “Both suspects are said to be engaged in trafficking of children, whose ages range from six months to one year, from different parts of the country to Abuja and using them to solicit alms from unsuspecting members of the public.

“It could be recalled, that Imaan Sulaiman-Ibrahim,   the Director-General of NAPTIP, had ordered an improved surveillance in the notable spots, especially within the FC T and its environs.”

In her remarks, the NAPTIP boss described the trafficking of children for alms begging as “a wicked act.”

Sulaiman Ibrahim stated, “This is a wicked act that must be stopped by all.

These innocent children are exposed to the harsh weather condition by the traffickers, who shade them like wares by the roadside while soliciting money to satisfy their selfish desires.

“We shall surely fish out the fleeing members of the syndicate and they shall face the full wrath of the law.”

She called on parents to look after their children to avoid them being trafficked by people, who scout villages on the pretext of offering help to needy families.