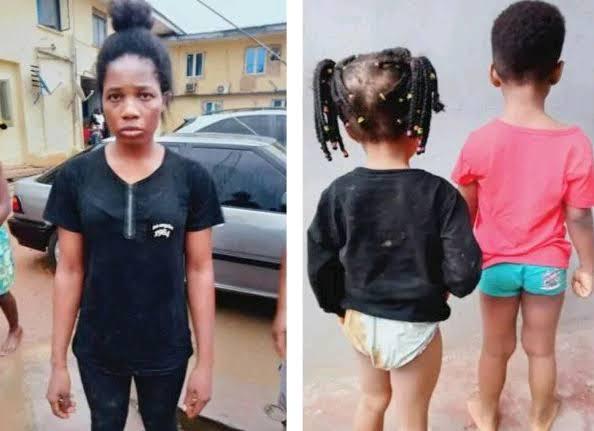 A 21-year-old househelp, identified as Precious Mmaduike, was detained by Edo state police officers for reportedly abducting her employer’s two children in Lagos.

NEWSNAIJA learned that operatives rescued the victims, identified as David Ibe, 4, and Chizaram, 2, both children of one Mr.  Ibe Phenasus of No. 31 Balogun Kuku street, Aguda Surulere, Lagos State, according to a statement released by the command on Saturday, August 28.

According to the statement, the housemaid was detained alongside two other suspects, Jane Osas, 35, and John Obasu, 45.

According to the PPRO, Precious Mmaduike, who leveraged her acquaintance with the children as their house help and took them from Lagos to Benin city, Edo state, on August 23, 2021, planned and executed the kidnapping,

According to the complainant, who is also the father of the children, his children were given N500 by his wife to go outside the compound in Lagos and purchase biscuit with their housemaid at about 08:45 a.m.

They waited for them to come back, but they never did. The housemaid’s phone was turned off, and all attempts to locate the children and housemaid were futile. The father promptly reported the incident to the Aguda Police Station in Lagos, where it was established that the housemaid’s last known whereabouts before turning off her phone was in Benin City, Edo state.

The abducted children were rescued on 26/08/2021 at about 1730hrs by operatives of the Edo state police command, Benin city in a very remote area at Upper Ekewan road, Benin city with the housemaid and the woman she came to visit with the children using information gathered from the origin of the abduction and field assets.

The woman had purchased gifts and other goods for the children and is presently being held by the police.

The PPRO stated that “While the operatives were on their way to the state command in Benin city with the rescued children, the suspect, and two other children found in the house, the woman’s husband, one Joseph Obaze, raised an alarm of kidnapping against the police operatives, attracting a group of unknown vigilante members who blocked the road,”.

The police officers announced themselves to the mysterious vigilante group, but they proceeded to attack the officers with a variety of weapons, injuring some officers.

“The vigilante gang had fled to an unknown location before troops arrived on the scene. The command is working to apprehend the Vigilante leader and his gang members who attacked the police officers, according to the statement.

The commissioner of police also urged all law-abiding citizens to go about their normal business, saying that the command would not allow miscreants disguising as vigilante groups to take over public space.