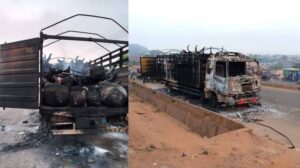 A truck loaded with cattle was reportedly set ablaze in Saki by an angry mob for killing a boy named Ayuba Raji on Monday.

According to an eyewitness, identified as  Kazeem Adebiyi, the incident happened at Challenge junction, along the Saki Dual Lane Road.

Adebiyi, said, the accident could be linked with over speeding by the truck driver.

He further stated that due to the ongoing construction work on the road, motorists usually violate the one-way rule.

Meanwhile, a resident of Saki, identified as  Mr.  Adekunle Lawal,  urged the contractors handling the project to devise a means to construct speed breakers in order to prevent motorists from overspeeding.

Mr. Lawal said, “on around 10 pm, an accident occurred at Challenge junction which claimed the life of our boy, Ayuba Raji. He was a younger brother to a popular Yoruba presenter and musician Monsurat Raji.

The young boy was riding a motorcycle when he was hit by a truck transporting cows out of the Saki.

“Angry mob sets the truck ablaze, it was late before we could get in touch with the police in order to avoid further damage.”

Olugbenga Fadeyi, the  Police Public Relations Officer, Oyo State Command, said, “The accident occurred in Saki. The young boy who came to the road without recourse to an incoming vehicle was hit in the process.

“He was rushed to the Baptist Hospital in the town but later died. Angry mob set the truck ablaze with 25 cows.”