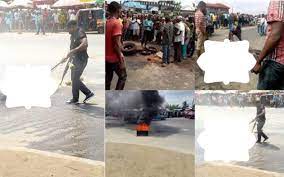 A suspected armed robber, who had allegedly been terrorizing the Ayede Ogbese community in the Akure North Local Government Area of Ondo State, was on Sunday killed by a mob.

NEWS NAIJA  gathered that the suspect, simply identified as Emmanuel, was caught while trying to escape with four motorcycles he had allegedly snatched from his victims in the area.

An eyewitness said luck ran against him when the truck he used to convey the stolen items broke down in the community.

The eyewitness stated, “The robber, known as Emmanuel, had been convicted before. Ever since he returned from prison, the community had not been at peace, as he terrorized residents heartlessly.

“We had been looking for him for a long time before he met his death on Sunday.”

When contacted, Mr. Tee-Leo Ikoro, the state Police Public Relations Officer, confirmed the incident and said the police rescued the suspect from the mob, but he died on his way to the hospital.

Ikoro said “Investigation has commenced into the killing,”