MEDICAL DOCTOR, 17 OTHERS ARRESTED BY EFCC OVER INTERNET FRAUD IN IMO 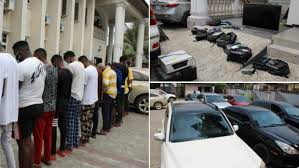 The Economic and Financial Crimes Commission(EFCC) the  Uyo Zonal Office of on Wednesday arrested a 28-year-old medical doctor, identified as  Chijioke Precious, and 17 others over alleged Internet fraud in Owerri, the Imo State capital.

According to the information gathered the suspects were arrested around 1 am on Wednesday in the Umuguma area of World Bank, Owerri, Imo State.

Other items recovered are over 20 sophisticated mobile phones, 12 laptops, four inverter batteries, one television, and jewelry suspected to be proceeds of crime