MARYAM SANDA TO DIE BY HANGING FOR KILLING HER HUSBAND 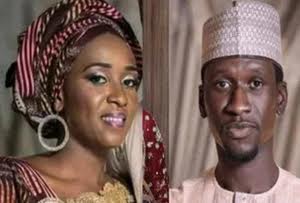 A Federal High court seating in Abuja, has sentenced Maryam Sanda to death for killing her husband, Bilyaminu Bello.
She has been standing trial for allegedly stabbing her husband to death.
Sanda reportedly  stabbed her husband to death on November 19th 2017.
Sanda had accused her husband of infidelity after seeing a text message on His Phone
Her husband, Bilyaminu was son of former Peoples Democratic Party National Chairman, Dr Haliru Bello.
Maryam Sanda crying profusely after the sentence
She was charged alongside her mum and house maid who helped conceal evidence.
The trial judge, Yusuf Halilu, said Sanda was guilty of the offence and deserved to die.
The judge said, “Convict clearly deserve to die. I therefore sentence Sanda to death by hanging.”