MANY INJURED AS EXPLOSION ROCKS MOTOR PARK IN RIVERS 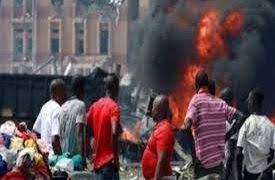 NEWS reaching us says six persons were injured while traders and motorists ran for safety after a substance suspected to be dynamite exploded at the popular Mile 3 Park in Port Harcourt, Rivers State Today,  Monday.

Residents of the area said they heard a loud sound at about 6.20 am when traders were bringing in their goods and others opening for business.

NEWS NAIJA learned the explosion occurred at the dry fish section of the park.

In the confusion that followed, two persons were severely injured, while scores, mostly women, suffered various degrees of injuries. Those injured have been rushed to a nearby hospital.

It could not immediately establish what could have led to the explosion or those behind it.

Our source who visited the area reports that the shops and businesses on both sides of the streets leading to the market were closed.

When contacted, Nnamdi Omoni, the spokesman of the state Police Command, he asked our source to send a text message, but he was yet to respond to it at the time of filing this report.