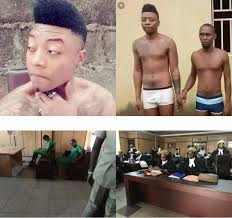 A Rivers State High Court sitting in Port Harcourt has convicted and sentenced one Sodienye Mbatumukeke to death by hanging over the murder of a Jumia delivery agent, identified as Chukwuma Eleje, in 2017.

Justice Chigozie Igwe, the presiding judge delivering the judgment on Monday said the prosecuting team was able to convince the court that Mbatumukeke committed the crime.

The judge also found him guilty of the second charge, which is armed robbery.

However,  Justice Igwe, discharged and acquitted the second accused person, named  Divine Naabe on the grounds that evidence provided by the prosecution team finding him guilty of the crime was doubtful and insufficient.

Justice Igwe said the first defendant, Mbatumukeke, was guilty of the two counts as the prosecution proved their case beyond reasonable doubt.

Bonaventure Ugwu, the convict’s lawyer, said they would appeal the judgement as instructed by his client, saying, “We have told him to put it in writing but he has given us his instruction orally to proceed to the Court of Appeal.”

Meanwhile, Ibiene Mbano,  the Director of Public Prosecutions, has expressed satisfaction on the judgment.

She stated “I am sure that this case will serve as a deterrent to those, particularly youngsters who think that they can grab whatever they want by maiming or killing,”.

Meanwhile, the wife of the late delivery agent, Blessing Eleji, thanked God for giving her justice.

Eleji, said, “I give glory to Almighty God who has done this for me. I say may His name be glorified and I thank the state government. My daughter was asking whether her father was going to return and I said no. It has not been easy for us without him in the family.

“I have been the one answering a lot of questions. His daughter thought that he went somewhere and he will come back because she was a year and seven months when he left (was killed).”

It could be recalled that the Jumia delivery agent, Eleje, was murdered on March 25, 2017 when he went to deliver an iPhone and other valuables ordered online by the convict, but was strangled and his body was dumped in a septic tank.