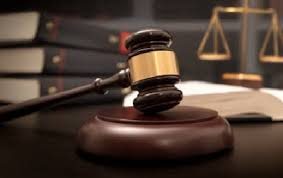 The Lagos State Special Offences Court has sentenced a man known as  Okechukwu Onyeakazi to 50 years’ imprisonment for defiling an eight-year-old girl.

Onyeakazi was arraigned on one count of defilement contrary to the Criminal Justice Law of Lagos State.

The Judgement was given by  Justice S. Nwaka, Onyeakazi pleaded guilty to the charge.

Adebayo Haroun,  the prosecuting counsel, had told the court that the convict committed the offence in 2017 in the Shogunle area of the state.

According to Haroun, the convict defiled the minor by inserting his fingers and manhood in her private parts on different occasions.

Following his plea, Haroun urged the court to sentence Onyeakazi accordingly, having found him guilty of the charge against him.

Justice Nwaka delivering her judgment held that the evidence and the two witnesses presented before the court by the prosecution were reasonable and found the convict guilty.

She afterwards sentenced him to 50 years’ imprisonment.