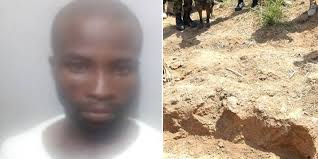 A bar attendant, identified as  Oritoke Manni,  aged 26 decomposing body has been found at a site in Otolu town, Akodo, in the Lekki Local Council Development Area of Lagos

NEWSNAIJA learned that Manni went missing after visiting her boyfriend, known as Segun Titilayo, at his house in the area.

When all efforts by Manni’s family members to locate her proved unproductive, they reported a case of a missing person to the police.

Muyiwa Adejobi, the state Police Public Relations Officer, in a statement on Thursday, said the victim’s corpse was found after an engineer reported to the police that his company while excavating its site at Otolu town, exhumed the body.

Adejobi noted that the deceased was identified by workers of the hotel.

The PPRO  said, “The Lagos State Police Command has arrested one Segun Titilayo, 29, of Otolu town, Lekki LCDA of Lagos State, for killing and burying the corpse of his girlfriend, Oritoke Manni, 26, a bar attendant at K.C. Hotel, Apakin town, Lekki.

“On October 13, 2020, around 11 am, it was reported that the suspect, Segun Titilayo, put a call to the deceased and she went to Segun’s house, but could not be traced or seen afterward.

“The police recorded a case of a missing person for the deceased. The police wireless message on the case was widely circulated to all police formations across the state for search and necessary police action as a practice.

“However, on November 7, 2020, one Adegbago David, an Engineer of Adron Homes and Properties reported to the police station at Akodo rea, Lagos State, that while the company was excavating its site at Otolu town, their caterpillar exhumed a decomposing corpse. Police detectives swung into action and the corpse was identified by the staff of the hotel to be Oritoke’s. The corpse was evacuated to a public morgue for autopsy.

“The police placed a manhunt on the suspect who was arrested and his been detained at the SCID Panti and giving useful information to help the police in their investigation.