MAN DIES AFTER WATCHING FOOTBALL MATCH WITH LOVER IN LAGOS 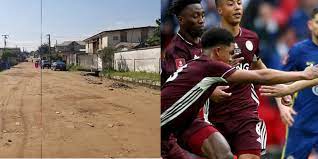 A man, identified as  Chika Uba, has died after taking his 32-year-old girlfriend, named  Amaka Joseph, to watch a football match on Adeniyi Jones Avenue in the Ikeja Local Government Area of Lagos State.

NEWS NAIJA  gathered that Uba went to pick his girlfriend from her residence on Ogunsolu Street, Cement area of Ikeja, and they both went to watch an English Premier League match between Chelsea and Leicester City at the Runway Bar on Adeniyi Jones Avenue.

After the match, it was learned that Uba took Amaka back to her residence, but the story took another dimension when he got to her residence and allegedly started acting strangely.

NEWSNAIJA  learned that Amaka sought the assistance of her neighbor, identified as Macaulay Justice, who helped in rushing Uba to the Lagos State University Teaching Hospital, Ikeja, for urgent medical attention.

However, Uba reportedly died on the way as one of the doctors on duty at the hospital pronounced him dead on arrival.

NEWSNAIJA learned that on Sunday, May 16, 2021, Amaka reported Uba’s death at the police station, where she explained that her boyfriend started acting strangely five minutes after their arrival at her residence.

However, when our source visited Ogunsosu Street on Sunday, some of the residents of No. 40 A and B said nobody bearing Amaka or Macaulay resided there.

The residents, who spoke to our source said they were unaware of the incident.

Meanwhile, it was learned that Uba’s family members refused to press charges.

When contacted,  Muyiwa Adejobi,  the state Police Public Relations Officer, said the case was reported to the police, adding that the command had started an investigation into the matter.