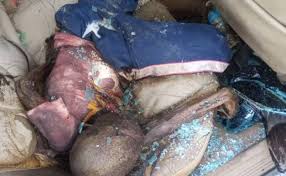 Operatives of the Delta State Police Command have uncovered the rotting bodies of two siblings found inside an abandoned car parked near the residence of the vehicle’s owner.

DSP Edafe Bright, the acting Police Public Relations Officer for the command, , in a statement on Saturday, identified the two corpses as one Kelvin Izakpa, 10, and Fega Izakpa, seven, both children of the late Meshach Izakpa.

They reportedly lived with their mother before their disappearance.

According to the police spokesman, the Abraka Police Station received a distress call around 3 pm on Friday that two decomposing corpses of children were sighted in a Honda Rover car.

According to the police, the vehicle belongs to one Eniku Tayo who resides in Warri.

Bright said, “Consequently, the Divisional Police Officer, CSP Aliyu Shaba, led police operatives to the scene immediately and evacuated the corpses. The decomposing corpses were later handed over to the family for burial while the suspect, Eniku Tayo, has been arrested, and the vehicle impounded.”

Bright stated that an investigation was ongoing on the case.