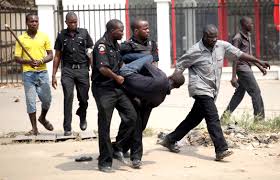 A man,  named Samuel Solomon, as been arrested by the Lagos State Police Command for allegedly defiling his seven-year-old daughter for two years.

The mother of the child,  identified as Rose Solomon, who made the complaint, alleged that her husband, Solomon, defiled her daughter and used a white handkerchief to clean the private parts of the young girl whenever he was done with the act.

According to Rose, Samuel used the same white handkerchief on her whenever they copulated.

Rose further stated that her husband forced her to sleep with other men in arranged hotels and any objection on her part came with grave consequences.

the woman further stated that she recently discovered that their daughter had a serious vaginal discharge with a very offensive smell.

She said, “I have been with him for nine years now, but he paid my dowry seven years ago. I suspected there was something wrong, but I was so blind with love, I loved him so much.

“I noticed that he did bring white handkerchief home from work, but I didn’t pay much attention to that.

“One day in church, I was given a prophecy that the white handkerchief my husband brought home from work was not ordinary and that he was using my daughter and me for rituals. That was when I started monitoring him.”

Rose said she later found out that her husband was a member of a cult and had to move out of the house for the sake of the young girl who was being molested.

in her statement, she said “We were together but for the safety of my daughter, I have moved out. This girl is just seven years old. I was informed that if I continue living with him, he will continue doing that to the girl to become rich one day.

“When I confronted him, he said there is nowhere I will go that anyone will believe me, that the girl has no problem.”

According to her the minor had been receiving treatment from Mirabel Centre and is gradually getting better.

She added that she left her husband’s house with her son and daughter to live in an uncompleted apartment in Ikorodu, where she sleeps on the floor with her children.

NEWSNAIJA learned that the legal head of the human right organization in charge of the matter, Advocates for Children and Vulnerable People’s Network (ACVPN), had formally put down a petition to the Area F commander. The case has been handed over to the Family Support Unit (FSU) of the command where Samuel is currently detained