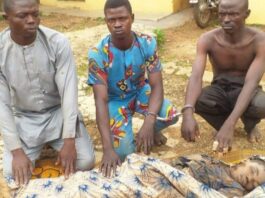 The Kwara State Police Command have arrested a man, identified as Alade James, for allegedly killing and burying a nine-year-old girl, known as Faith Samuel.
NEWSNAIJA learned the suspect buried the victim in Offa in the Offa Local Government Area of Kwara State with the aim of using her for a money ritual.
The state Police Public Relations Officer, identified as Ajayi Okasanmi, in a statement on Sunday, said operatives, who dogged up the corpse, discovered that the girl was buried with a N1,000 note.
“Around 6.12pm of Saturday, September 25, 2021, acting on actionable intelligence, a team of policemen arrested a man, Alade James of Alawe compound, Offa, in the process of burying a corpse in the Ikotun area of Offa. Preliminary investigation revealed that the suspect had killed and buried the nine-year-old girl, Faith Samuel, of Onireke area Offa.
“The corpse was recovered with a N1,000 note buried with it. The body was deposited at a mortuary for an autopsy after a doctor certified the girl dead,” he added.
Okasanmi said the suspect confessed to killing the girl for a money ritual.
He said, “The parents of the deceased have been contacted, while the Commissioner of Police, Kwara State, Tuesday Assayomo, has ordered a discreet investigation into the murder.”