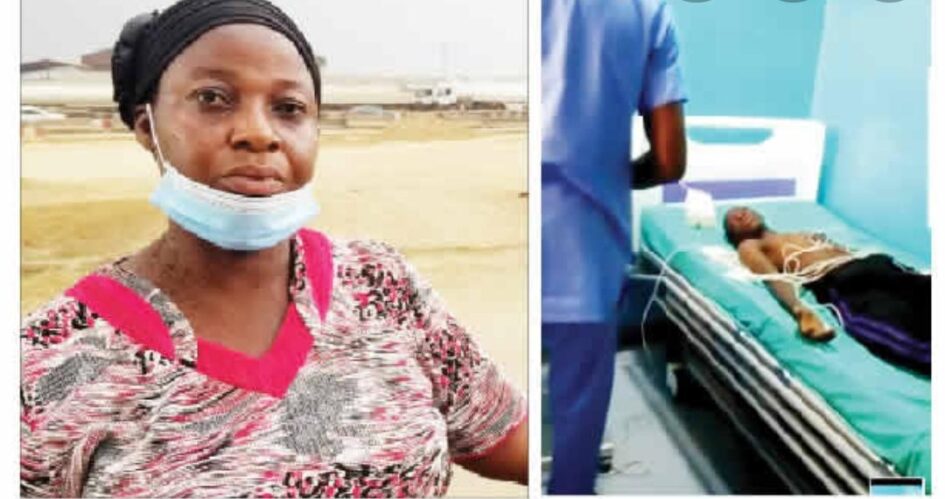 A woman, identified as  Kehinde Omoyeni, has accused her husband, Olashile, of abandoning their 17-year-old son, Clinton, after he was diagnosed with congenital heart disease at the Lagos State University Teaching Hospital, Ikeja.

Kehinde speaking with Journalist said she informed her estranged husband that the boy needed surgery, estimated at N3.1m, he started avoiding discussions on his health.

The 43-year-old woman said her spirit was broken when her husband’s family accused her of taking advantage of her son’s condition to make money.

She said, “Clinton suddenly started stooling and vomiting, and I took him to see a doctor at the Ikorodu General Hospital. He complained of consistent chest pain in the hospital and the doctor said he had a heart problem and referred us to LASUTH.

“When we got there, we ran some tests, including an Echocardiogram test, and he was diagnosed with a hole in the heart in November 2018. After admission, he was referred to a cardiologist in 2019; I have been taking him to the clinic in LASUTH until I was referred to Babcock University for surgical evaluation.

“I did an Echocardiogram test again with the little money raised and it was reaffirmed that he had a hole in his heart. I was told he urgently needed surgery, which cost N3, 125,000. I have been running around to meet family members for help and the little funds I got was spent on treatment.”

The Ogun State indigene said Clinton’s academics had been affected by the problem, adding that the teenager’s condition had worsened.

She said, “My son has been pleading with me to help him raise money for the surgery, but I have been helpless. I cry each time I see him in this condition because he gets tired easily. I have called his father and his family members, but they said that they don’t have money and that I should take him to local herbal medical practitioners.

“The most painful part was that with all the test results and medical records, my husband’s family members said I was using my son’s condition to make money for myself.  Although we separated before Clinton got sick, after he heard the amount to be paid, he stopped picking my calls and never made any attempt to help. I don’t want to lose my son.”

Reacting, Olashile said he had tried his best for the child, adding that his wife only wanted to blackmail him.

“My parents told her to bring the child, but she refused and kept asking for money. But if she feels that the solution is to blackmail me, there is no problem. I have tried my best on him because he has been giving us health problems since we gave birth to him,” he added.