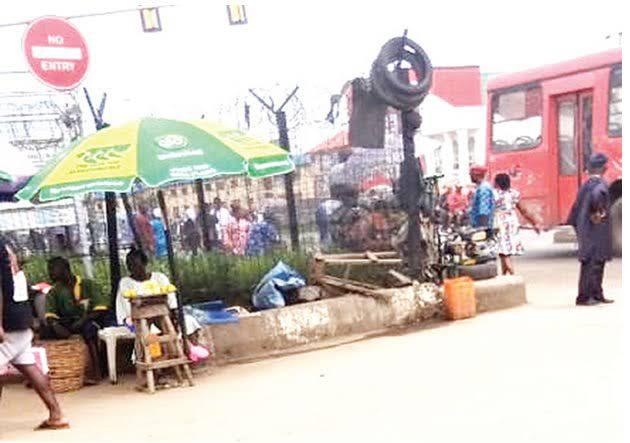 A member of the National Union of Road Transport Workers, identified as Rasheed Yinusa was killed in a battle with Abdulazeez Olasupo, a lotto agent, in the Benson neighborhood of Ikorodu, Lagos State.

NEWSNAIJA gathered that Yinusa, aka Apase, went to the lotto agent’s shop and put a N500 bet.

An eye witness , simply identified  only as Segun, informed our source  that things took a turn for the worse after Olasupo asked payment after printing the bet. “Yinusa became irritated, complaining that he was asking for the money as if he was going to flee.

He added “People on the ground, including other customers, swiftly accessed him and noticed that he was having a problem. He was brought to a neighboring hospital were he was  pronounced dead,”

meanwhile, a  local businessman, identified as Ibijoke Alebiosu claimed that the late union member was fond of staking bets without paying.

Ibijoke furthermore stated that “The money that brought about  the argument is between N200 and N500,”.  adding that Yinusa has a habit of staking bets without paying. He was a member of the NURTW and used to collect money from commercial buses at the Benson Bus-stop.

“Unexpectedly, he was the one who collapsed and died on the spot. The lotto agent did not attack him; the agent’s saving grace was that the incident happened  in front of his business, near the Unity Bank at Benson Bus-stop, rather than somewhere hidden.”

NEWSNAIJA also gathered that Olasupo was initially detained, but was released after witnesses testified about what happened.

Yinusa’s relatives are likewise believed to have refused to press charges.

The family reportedly went to court to swear an affidavit to claim his body and have it buried according to Islamic traditions.

The Lagos State Police Public Relations Officer, CSP Adekunle Ajisebutu stated “I will get back to you shortly after being adequately briefed”.