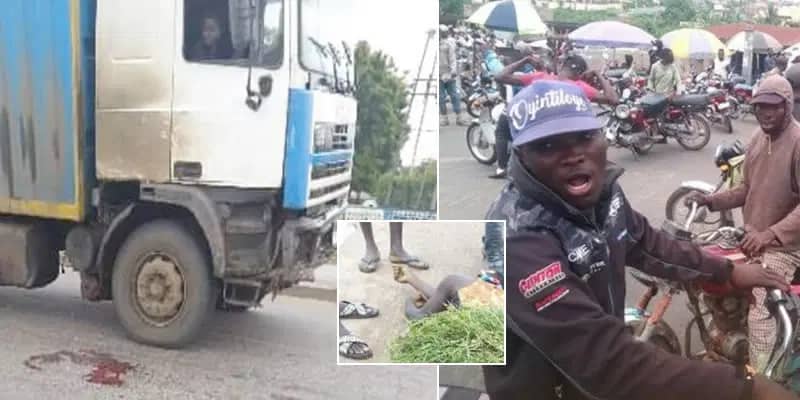 An unknown commercial motorcyclist popularly known as okada rider has been reportedly crushed to death by a vehicle at Ikeja Along on Lagos-Abeokuta Expressway.
NEWSNAIJA learned that the ride was allegedly running away from officials of the Lagos State Environmental and Special Offences Unit (task force), who raided the spot on Saturday morning when he met his death.
It was further learned that the men stormed the area around 11am to enforce the ban of okada on the highway and other restricted routes in the state.
The deceased’s co-riders were said to have gone on the rampage and made a bonfire on the road, creating gridlock on the busy expressway.
It was gathered that it took a reinforcement of policemen from different formations to calm the angry protesters and return Normalcy in the area.
An eyewitness, who identified himself as Samuel Akintunde, speaking to our reporter said that a member of the task force team chased after the victim, caught up with him and pushed him off the motorcycle.
Akintunde said the rider fell on the road and was crushed by a speeding vehicle, adding that the team fled the scene afterwards.
The man said, “The taskforce men came around 11am to seize motorcycles. The okada riders made frantic efforts to evade arrest and the officials chased after them. One of them caught up with the victim and they were both struggling with the motorcycle.
He pushed the rider from the bike and he landed on the path of a speeding bus which hit him. He bled from the head and died on the spot. The officials left the spot immediately when they realized he was lifeless.”
Another eye witness known as Daniel Chukwudi, said okada riders regrouped on the expressway to protest which led to gridlock. “They blocked a section of the road and made a bonfire. Police later reinforced and chased them away with gunshots. They (police) took the victim’s corpse away,” he added.
However, the Head, Public Affairs Unit of the taskforce, Femi Moliki, absolved the agency of any wrongdoing. He said, “I am not aware of the incident. Our men didn’t go out for operations today (Saturday).”