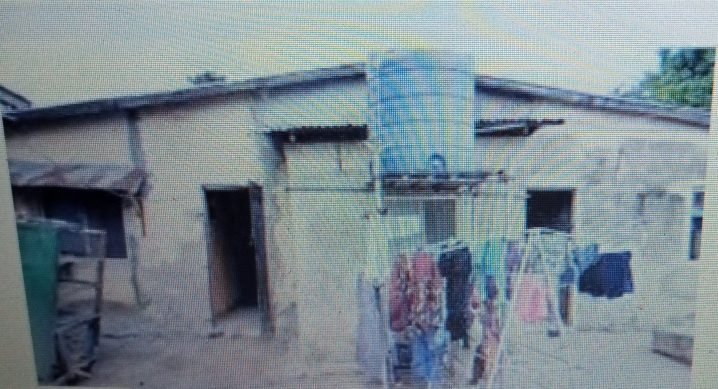 The husband, children and neighbours of a pregnant woman, identified as   Ramota Raheem, have been left in shock after finding her remains in the bathroom of her apartment in the Agboju-Satellite Town area of Lagos State.

NEWSNAIJA learned  that Ramota’s children left her at home to a destination in the area, but on getting back home in the evening, they met the door of their apartment bolted from the back.

Efforts by the children and neighbor’s to get their mother to open the door proved abortive as several shouts of her name were unanswered.

The deceased’s husband, known as  Sikiru Salami, whose calls to her telephone number were unanswered, came to check on her only to discover that she was not responding to calls to open the door of her apartment.

At that point Salami, the children and some neighbor’s forcefully broke down the door to gain entry into the apartment.

A neighbour,  of the deceased who  simply identified herself as Titilope, said Ramota’s naked remains were found on the floor of the bathroom, adding that the police were immediately contacted after the discovery.

She said, “The incident happened on Sunday and we were a few minutes away from breaking our fast. She (Ramota) had two children and they were just coming in and going out in the afternoon.  She was sleeping inside and maybe because of her condition, her children did not want to disturb her.

“Her last born left her at home around 2pm to pray. I saw her in the morning and she was fine when she greeted me outside and entered her apartment. She was a businesswoman. It was raining in the evening when her last born returned home to break his fast.

“Her husband also came to check her, because he was worried that she had not been responding to his phone calls. She also failed to respond to her children’s shouts to open the door. So, they had to break the door to gain entry and when we entered, we saw her sitting motionless on the floor of the bathroom.

“She was naked, but we couldn’t say if she fell or another thing was responsible for us meeting her in that condition. But it appeared that she was trying to take her bath. All of us raised the alarm and her husband went to the police station to report the incident.”

It was further learned  after the police visited Ramota’s residence, she was evacuated to a nearby hospital, where she was pronounced dead.

However, Titilope,  disclosed that surgery was performed on the deceased  to remove the already dead foetus.

She said, “Her family members were notified about what happened. The police also came and confirmed that she was dead. Neighbor’s and residents of the area also confirmed the same.

“She was taken to hospital, where she was pronounced dead. But because she was heavily pregnant, a surgical operation was performed on her corpse to remove the dead foetus from her. She was buried the following day somewhere in Ogijo, Ogun State.”

Ramota’s elder sister, named Kudirat, speaking to our source said   that the family gave its consent for her to be buried, adding that members had visited the site where she was buried.

She stated, “We no longer have parents. We don’t live here, but it was her neighbors who informed us about the incident. The man that impregnated her does not live with her. We don’t have his contact; we only knew him when he got our sister pregnant; but now, our sister and her unborn child are dead.

“We were not around when our sister was buried, but we gave our consent. We didn’t come to blame anyone; we only came to Lagos to check where she was buried in Ogijo. Our family members have already taken the children to the village.”

When contacted, Muyiwa Adejobi,  the state Police Public Relations Officer, he  said no visible mark of violence was seen on Ramota’s corpse when the police visited her apartment.