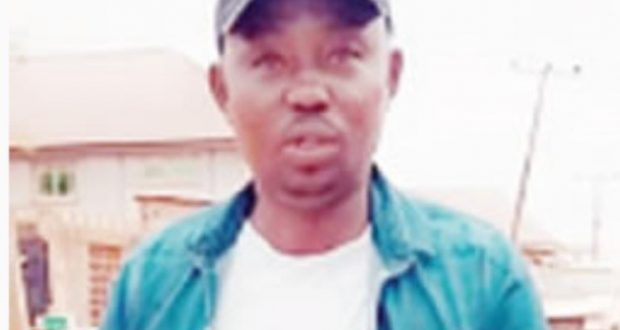 A police inspector identified as Adelakun Amubieya, attached to the Agbado Police Station, Lagos State Police Command, has been arrested for allegedly raping an undergraduate, aged  18-year-old, simply known as Joy in the Ipaja area of the state.

NEWSNAIJA  learned that the suspect and the victim lived in the same compound on Abesan Estate.

It was gathered that the cop and his wife were said to have promised to teach the teenager how to make money with an application on her phone.

The 18-year-old, who went to the couple’s apartment on November 15, reportedly met Amubieya alone.

The policeman allegedly forced her into the bedroom and raped her.

Joy in an interview said that all appeals to the suspect to let her go fell on deaf ears.

Narrating her ordeal, the 18-year-old said, “Sometime in October, I came downstairs to receive a call due to bad network and I overheard the policeman and his wife talking about something, but I didn’t pay attention.

“When I was done with the call, his wife said their discussion was about a betting site and all I needed to do was to drop my details and I would be receiving N2,000 every three days. They said I must be 18 to play. I told them that I would return on Friday, November 13, when I would have clocked 18.”

The victim said after she returned from church on the Sunday of that week, she went to the cop’s apartment.

She said  “I sat on the edge of the chair next to the door, while he sat on the chair near his room. He said he just woke up from sleep and I should come back later.

“I struggled to get him off, but he held my legs and had sex with me. I begged him to stop, but he didn’t answer me. I could not shout because I was scared of what he could do to me. He is a policeman and may have a gun in the house. Besides, people were making a noise outside, so no one would hear me.

She added that “I told him to get a condom so he could get off me and I could look for what to do, but he didn’t answer me,”.

The victims’ father, who demanded justice, said when he got to know about the rape, he challenged the suspect, who denied it.

The Father in his statement said that my daughter was lying against him. I took my daughter to a hospital and some tests were carried out. I also reported at the Ipaja Police Station. Policemen were sent to his apartment, but he was not around. His office was called as well, and when they could not produce him, I reported to a rights group and we went to Mirabel Centre where tests were conducted.

“After they waited for him to show up at the Ipaja Police Station and he didn’t, the case was transferred to the Gender Unit at Ikeja. The man didn’t show up till Monday after sending people to beg me. When I asked him why he raped my daughter, he said it was the devil’s work. I want justice because my daughter is traumatized,” he added.

A voice note obtained from the suspect reportedly sent to the victim’s father, begging for forgiveness.

Speaking in Yoruba, he said, “Please, I beg you in the name of God, treat me like a prodigal son that has offended his father. I don’t have anything to say before God and man because I know how you treat me and my family; you’re like a daddy to me.

He said “I’m begging you in the name of God and the creator of my children, mum, and late father. I’m like the breadwinner of my family; if you continue to pursue this case, you want to make my parents cry, and you don’t want me to achieve my aim in life because this is becoming more than what I bargained for.

“If I cannot continue again, it will be okay to take my life, but who will take care of my children? There’s nobody. Please daddy, I beg you in the name of God, with the blood of Jesus, have mercy on me, tell me the way forward. I could not eat or drink since it happened. I have tried my best to talk to God; even if I bring a lot of people to beg you, it cannot equate my sin before you.”

She said “I also want to advise parents to tell their children to be careful of where they go; they should not enter into people’s houses anyhow because it is dangerous,”