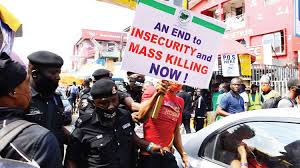 No fewer than 20 policemen guarding the Lagos State House of Assembly in the Alausa area of the state brutalised two PUNCH journalists identified as Femi Dawodu and Segun Odunayo, while covering the #EndSARS activities in the area on Wednesday.

Governor Babajide Sanwo-Olu on Tuesday declared a 24-hour curfew to stem the tide of the growing violence in the state but allowed those on essential services such as health workers, security operatives, and pressmen to carry out their legitimate duties.

The two journalist had gone to cover events around the Alausa area, a major demonstration ground of the #EndSARS protesters calling for a total overhaul of the Nigeria Police Force.

It was learned that the duo was recording a live video of the activities going on in the area when the policemen apprehended them and ordered them to stop the recording.

After showing the policemen their identity cards, indicating that they are journalists covering #EndSARS protests and monitoring compliance with the government-imposed curfew, the policemen became annoyed and bounced on them.

Odunayo said the policemen tortured them for four hours, adding that they stripped them of their clothes, laid them on the floor, beat them with a stick and guns, and took a video recording of them while torturing them at the Lagos State House of Assembly.

Odunayo said, “Femi and I were at the Secretariat in Alausa around 7 am and were doing a live video of the activities going on in the area. We were heading back to the Expressway when a group of armed policemen accosted us at the Lagos State House of Assembly roundabout and immediately collected our phones. We showed them our ID cards but they refused to let us go.

“What got the policemen annoyed was that we saw them using a stick and a rubber to beat a young man and during the live video, they heard me saying that they were beating someone. So, after they arrested us, they tortured us and demanded that we should do another live video denying the statement but we refused.

“Each time we refused, they slapped us, used a stick to beat us, used the butt of their guns to hit our heads and bodies after stripping us of our clothes. All they want was for us to do another live broadcast to claim that we lied and we didn’t because we said the truth.”

Dawodu said it took the intervention of the state Police Public Relations Officer, Muyiwa Adejobi, before they were released at the Alausa Police Station, adding that prior to their release, the policemen took their details, including their addresses, took a video record of them and threatened to go after them if any negative report was published about what happened.

He said, “The policemen were transferring the aggression of what is happening regarding the #EndSARS protest on us. They later took us to the Divisional Police Station in Alausa and if not for the DPO, the policemen guarding the LSHA that arrested us would have done more grievous things to us.

“The PPRO and the DPO later spoke with them and we were released.

“But despite his intervention, we were told to write statements. They collected our details, address, took video recordings of us making false statements during the torture, and threatened to use it to blackmail and go after us if we end up doing any bad report against them.”