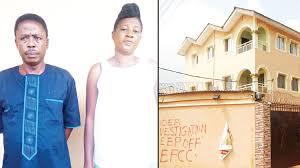 NEWSNAIJA learned that the couple and other suspects at large defrauded one Dunni Olateru-Olagbegi of the said sum under the guise of helping her to avert mysterious death.

It was gathered that the victim, sometime in May 2013, boarded a cab with the fraudsters and upon entering the cab, the gang started arguing about a bag filled with dollars.

NEWSNAIJA learned that minutes after the syndicate argued about the bag, one of them told the victim that she would have to undergo cleansing to prevent mysterious death after listening to their conversation.

According to the Economic and Financial Crimes Commission,(EFCC)  the victim was taken to an unknown location, where she gave the couple and other members of the syndicate various sums in cash and bank payment, amounting to N53,713,260 for the spiritual exercise.

The Anti-graft Agency, in a statement on Monday, said it was revealed that over N9m was paid into Oyegunle’s account, while other funds were traced to her husband’s account, adding that the proceeds of the crime were used to build a hotel.

NEWSNAIJA learned that the couple was arraigned on four counts of conspiracy and obtaining by false pretenses.

However, they pleaded not guilty to the charges.

Justice Joyce Abdulmalik, of the Federal High Court in Ibadan, delivering judgment on Monday, sentenced them to 10 years’ imprisonment on each count, adding that the sentence, which would start from the day of their arrest, would run concurrently.

Abdulmalik, also ordered that the hotel be sold and the proceeds, if not up to N53,713,260, be returned to the victim and if it exceeded, the balance be paid into the Federal Government’s account.