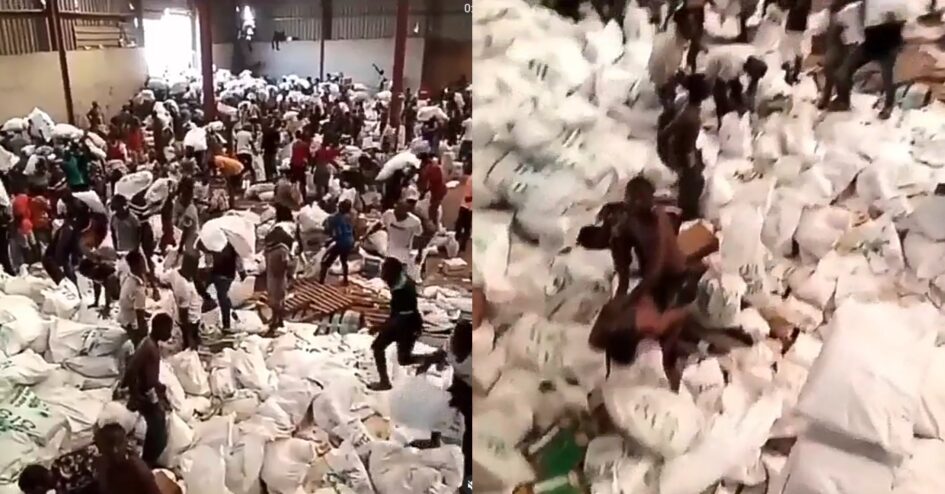 Angry and hungry Nigerians on Thursday broke into a warehouse used for the storage of COVID-19 palliatives in the Mazamaza community, in the Amuwo Odofin Local Government Area of Lagos State.

Newsnaija gathered that Residents were said to have looted foodstuffs in the warehouse, located on Benster Crescent, also known as  Monkey Village.

Clips of the looting posted on social media revealed thousands of residents trooping into the warehouse to carry bags of rice, garri, beans, noodles, spaghetti among others.

It was learned a  military truck was also seen being loaded with the palliatives.

However, Abisola Olusanya,  the state acting Commissioner for Agriculture, has condemned the looting of the warehouse, saying the foodstuffs were donated to the government by the private sector-led Coalition Against COVID-19 (CACOVID).

Olusanya explained that Governor Babajide Sanwo-Olu on September 22, 2020, formally took the food palliatives from the CACOVID team for distribution to indigent residents.

“The government notes that the warehouse in question is not state-owned and its usage was made available to the CACOVID group. The state government was allowed to commence re-bagging of food items allotted to it from the quantities meant for South-West states.

The re-bagging was being done to account for each beneficiary receipt as was required and monitored by the CACOVID team.

“The distribution was ongoing, but was put on hold due to protests, before the invasion of the warehouse today (Thursday),” she added.