LAGOS GENERATOR REPAIRER HOSPITALIZED AFTER BEING ATTACKED BY HOODLUMS 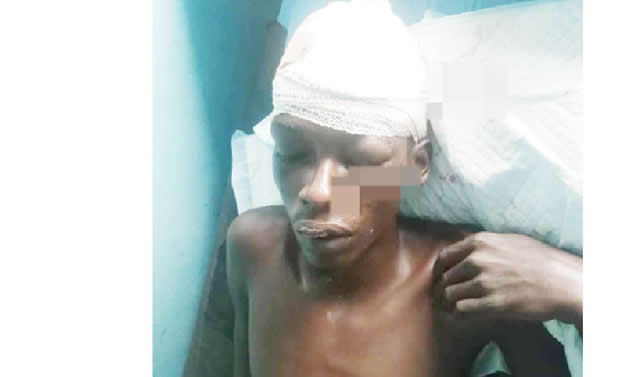 A generator repairer, identified as Segun Akinyemi, has been hospitalized following an attack on him by hoodlums around New Garage in the Oworonshoki area of Lagos State.

NEWSNAIJA learned that Segun and his customer were attacked by the hoodlums around 2 pm on Sunday, April 4, 2021, the hoodlums had been chased out of the community by the private security outfit hired by the residents.

However, the hoodlums allegedly vowed to avenge their eviction by attacking residents of the area seen in other communities close to Oworonshoki.

Segun, who managed to speak to our source on his hospital bed, said he was able to escape the attack by raising a false alarm that the police were on their way.

He stated, “My customer came to call me from Oworo to come and work for him at Ifako on Sunday, and while on our way, some guys started shouting that we should wait, but the motorcyclist did not stop.

“All of a sudden, I looked back and saw them chasing us with motorcycles and when they caught up with us, they accused me of being an Aiye Confraternity member and I told them that I was not a cultist and asked if they did not recognize me because I trained as an apprentice at Ifako, but they didn’t answer me and started attacking me that I came from Oworo and that we were the one that sent Amotekun after them to chase them from Oworo, and I told them that I didn’t know anything about it, but they didn’t answer me.

“They pushed my customer away after robbing him and they started beating me with every weapon they could lay their hands on. They crushed my head with stones and my equipment, but when I realized that I might not survive the attack, I had to raise a false alarm that the police were coming so that they could leave me and that was how they left me and ran away. If I had not raised the alarm, they would have killed me there.”

Also, a  resident of Oworoshonki, who spoke on condition of anonymity, told our source t that the community had to hire the services of a private security outfit after the residents got fed up with the atrocities of the hoodlums.

He said, “We have been having security issues in Oworoshonki and recently, the community hired a security outfit to flush these guys out of the community; so, these guys ran to Ifako, but they are now threatening that any Oworonshoki resident that comes to Ifako will be dealt with. Three people have been killed in the last three months, all because we got our security outfit.”

It was further learned  that the matter was reported at the Alonge Police Station.

When contacted, Olumuyiwa Adejobi,  the state Police Public Relations Officer, said he would get back to our correspondent but had yet to do as of the time of filing this report.    ,,